skip to main | skip to sidebar

Judah SOLOMON was the son of Isaac SOLOMON, a London merchant, and his wife Rebecca. Judah was born about 1778 and married a widow, Esther ABRAHAMS, in January 1805 at Sheerness in Kent. They each brought about £100 to their marriage as dowry.
They had about ten children, with one expected, when Judah was convicted at the Kent Assizes in 1819, with his younger brother Joseph, for hiring burglers to repossess unpaid for goods at Sheerness. The prosecutor at the trial was Esther's former father-in-law, Abraham ABRAHAMS.
Judah was 49 years old when he was transported to Sydney on Prince Regent with his brother. They arrived in Hobart Town in March 1820 on Castle Forbes, and had started a shop at their residence in Argyle street by January 1821.
In 1822 Henry Davis, the colony's first free Jewish immigrant, brought a subscription from the Sheerness merchants to the Solomon brothers which accelerated their business successes and enabled the building of Temple House, which still stands today.
In 1823 they were among the 200 foundation subscribers to the Bank of VDL and becoming quite wealthy, although still convicts. Judah gained his Ticket-of-leave in 1823 and later claimed that he should have been pardoned by Colonel Sorell as far back as 1823-4, but for a debt which a Public Officer owed me.
It is strange that convicts could arrive and set up in business so quickly. My hypothesis is that Lt-Gov. Sorell did not get on with existing merchants such as Anthony Fenn Kemp and Richard Barker and encouraged the competition which the Jews provided under his control. It was a period of increasing economic development in the colony as free immigrants started to arrive, lured by free land grants and convict labour.
Judah had a son, Joseph, with his housekeeper, Elizabeth HOWELL, in 1826. Her sister had married Henry Davis [qv] in 1823.
In 1828, Judah's son Isacc arrived, and in 1829, his son Michael arrived with Henry SOLOMON.
In February 1832 Judah gained a conditional pardon and in December that year, his wife and three of his daughters arrived on Palamban.
Judah's brother, Joseph, had divorced his wife before leaving England and remarried in 1833, renouncing his Jewish faith, but Judah was unable to return to England to obtain a divorce from Esther unless he obtained a full pardon. Thus began a long correspondence as he sought it and she sought to deny it.
Judah and Joseph went separate ways with the latter in the north of Tasmania, while Judah continued his business at Temple House and donated land and money to build a synagogue which was completed in 1845.
Judah died from heart disease in 1856, Esther in 1861 aged 90 and Elizabeth Howell in 1864, aged 64.
His son Joseph was his sole executor, major beneficiary and trustee for his daughters, Sarah and Lydia. Joseph had married his cousin, daughter of Henry Davis and Hannah Howell, but they had no surviving children and Temple House was left for the use of his nephew Samuel Benjamin, youngest son of Lydia. 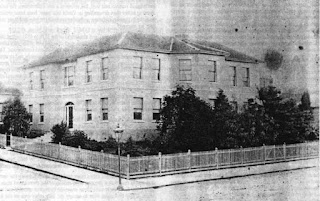 This blog is an online record of my ancestors. Please contact me if you have a common interest in any of these people.
Your comments are welcome and are forwarded to me automatically or you can contact me at dicksteel48 at gmail.com

As with a pedigree chart, I have started with myself and will work back.

This column provides links to the surnames, generations, places they lived, and ships they came in.